Our Butterstone.TV monthly Live Broadcasts have been running now for over 5 years! Begun just before Christmas 2011 with a programme featuring Dougie with great friends and musicians Greg Lawson and Pete Garnett they have unrolled over the years through all the seasons…filmed inside and outside in many different parts of Scotland with an array of special guests during that time. 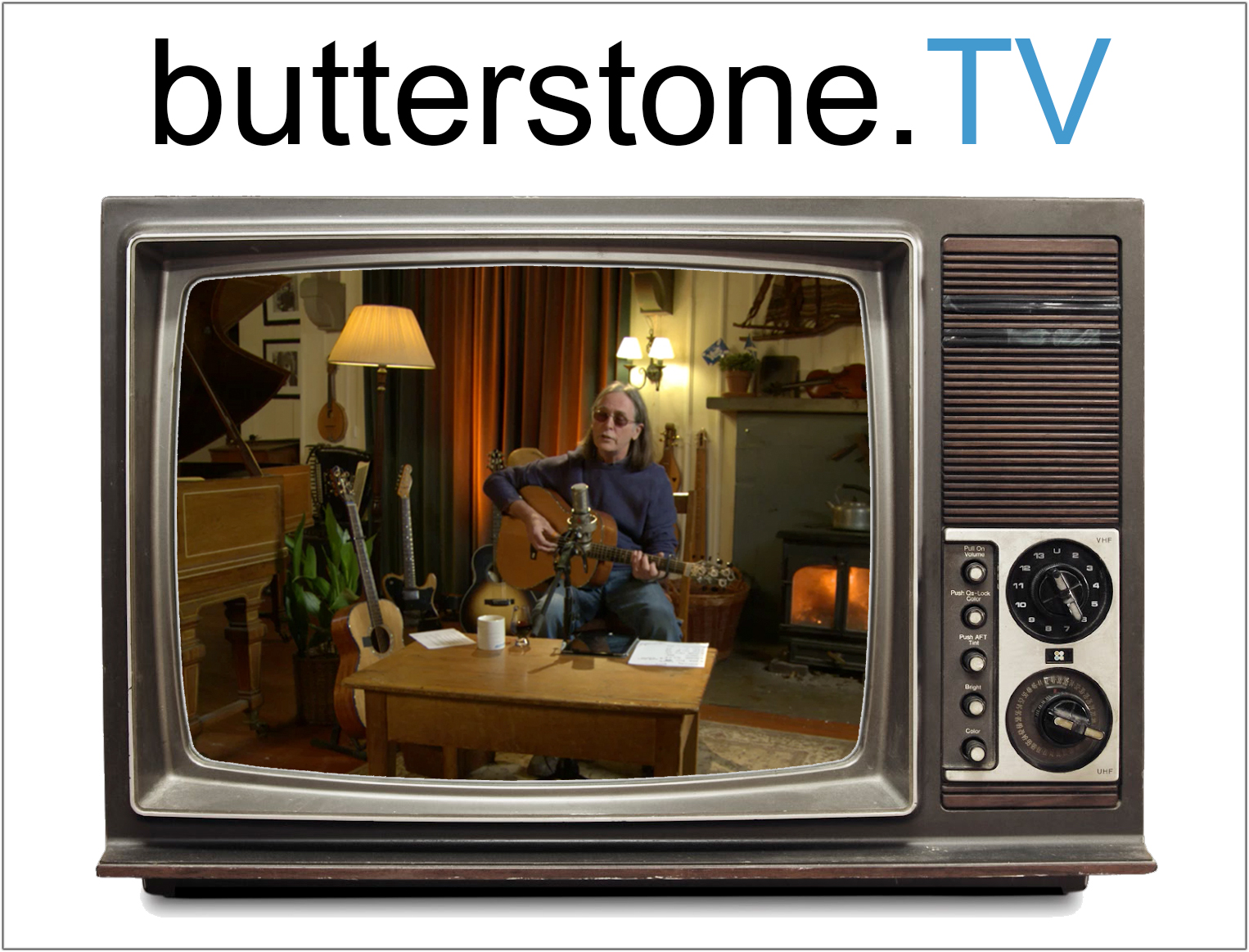 Every programme has been memorable for one reason or another… from Dougie’s not-yet-quite world-famous 'show and tell' sessions to flown in short films of attacking bees or curious emus! Our global family viewing the Live Broadcasts has grown to include individuals and families from over 27 different countries spanning all the continents.

Because of the nature of the world’s time zones we have had feedback from folk watching very, very early in bed in New Zealand, on the bus on the way to work in Sydney at 6am in the morning, to others who watch at lunch-time in various parts of the USA and very late at night in India! For those who, for whatever reason, find it too difficult to watch live every programme is made available to view 'on demand' within about 24 hours.

We’ve had festive broadcasts…. from the first broadcast in December 2011 (Dougie with wonderful friends and musicians Greg Lawson & Pete Garnett) from the Old School at Butterstone to the most recent Christmas 2016 from the living room of our Old Schoolhouse! 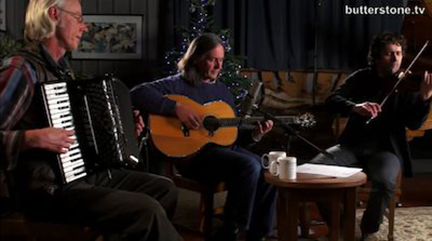 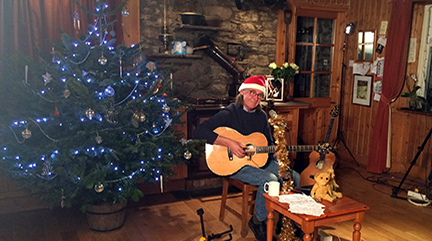 We’ve filmed inside and outside….through every month and all weather! 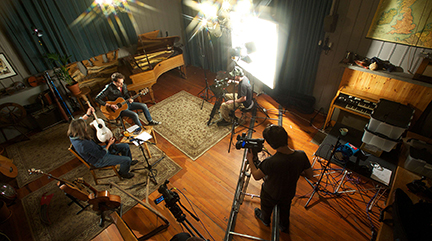 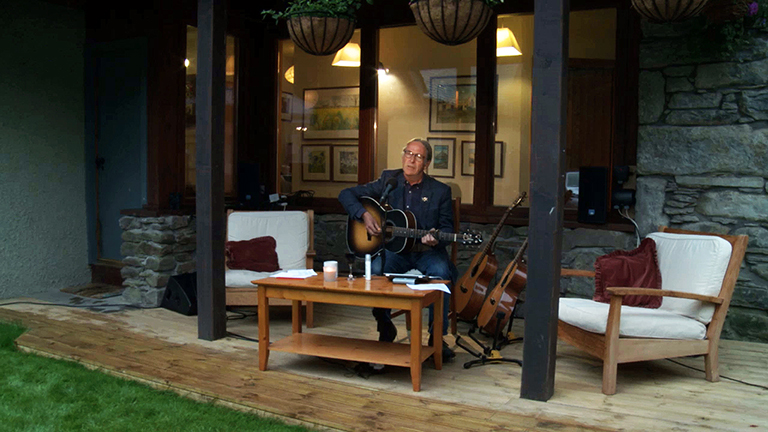 in different parts of Scotland….from the west coast of Lewis ... 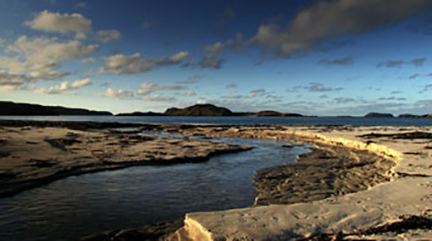 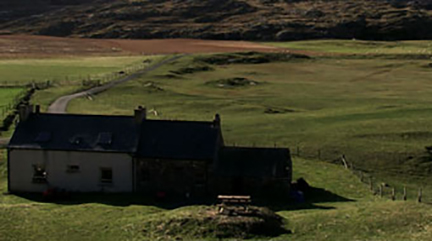 to our own Butterstone Loch in Perthshire to An Tobar, the arts centre in Tobermoray on the Isle of Mull! 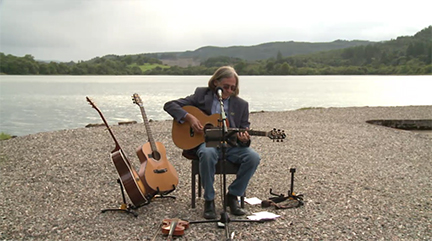 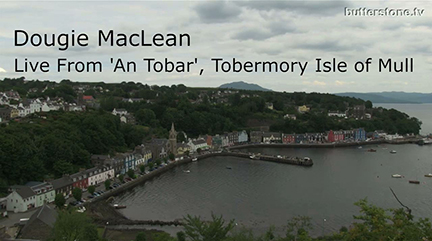 featuring an array of specially talented guests, on different occasions from 2012-2017, that have all added their magic! Amongst them were stunning musician Tim Edey (whose skill on acoutic guitar, whistle and concertina are legendary) and great long term friend and broadcaster Fiona Ritchie whose radio programme "Thistle & Shamrock" on National Public Radio in North America has introduced so many people over the years to acoutic celtic music...including Dougie's! 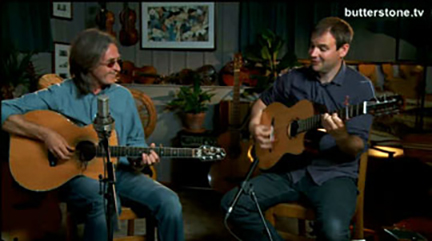 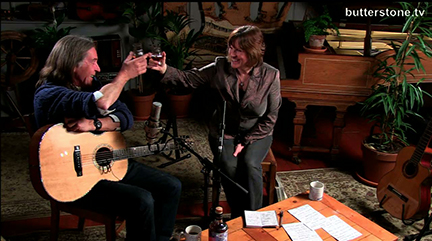 Phil Smillie and Roy Gullane from the Tannahill Weavers (like menmbers of his family!...the Tannies were the first band toured the world with) and Martin Hadden another very long term friend of Dougie's who was a member of Silly Wizard and now owns and runs the production company Birnam CD. 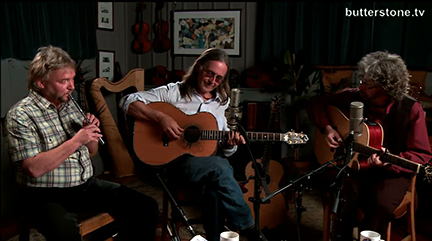 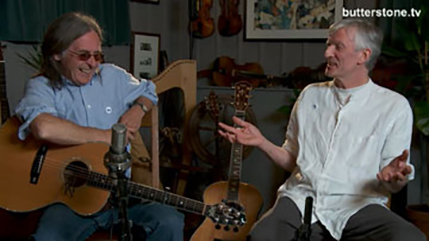 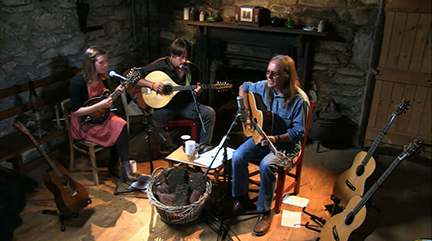 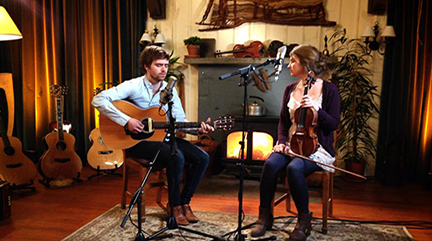 We've had overseas musicians and larger groups involved in our monthly broadcasts including the incredibly musical group from Australia, The Mae Trio in 2015 and the brilliant band Blazin' Fiddles! 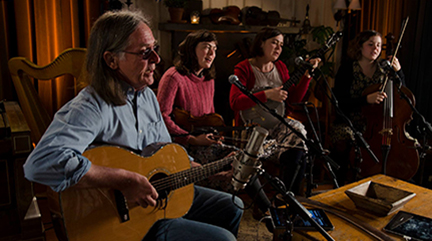 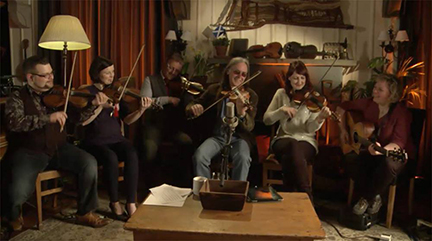 And that's not all the artists who have joined us!! Once you have subscribed you can browse and enjoy the many hours of past monthly broadcasts...and enjoy many of the Perthshire Amber Festival concerts as well. We have plans for lots more unusual and beautiful film locations throughout Scotland in months and years to come but this coming Thursday night (March 23rd 2017) at 7pm (UK time) we will be broadcasting from the living room of the Old Schoolhouse. The theme is The Land...and lots of requests have been received already! Come and join our growing global family! Go right now to www.butterstone.tv and sign up for a month to try it out....and make sure you let us know where you will be viewing from! You can do that via our Facebook page is you fancy www.facebook.com/ButterstoneTV

We always receive loads of emails and Facebook comments after the show and of late more than ever as Dougie has done a run of special programmes with different themes… festive special, Burns Night Special, Love Songs, Songs of The Land…which are proving really popular and engaging! Just to give you a flavour here are a tiny selection of the many comments received after the February 2017 Love Songs Special which timed in with Valentine’s Day.

"Dougie did one of the most unique compilation of songs for Valentine's day ever! I am also a fan of Bob Dylan, James Taylor and many others. Dougie's shows are all uniquely 'him' and that is why I will not ever miss a streaming". (Joan from Windsor, Ontario, Canada)

"Each broadcast seems to have its own interesting surprise. This time it was the cover of of James Taylor’s 'Something in the Way She Moves'. Great to see Dougie play this. And it was a perfect extension of a distinctive pattern of love-song in this Valentine’s Day broadcast: She is the Deepest Part of Me … She Loves Me (When I Try)… She Will Find Me …! So thank you all once again!" (Ian & Leena from Tampere, Finland)

"Great show with a lovely collection of love songs and a couple of surprise covers. Thanks so very, very much for playing my 'Only Love' request… it was absolutely beautiful".(Martin from Lugton in East Ayrshire, Scotland)

"Thank you for the wonderful love song show today... My internet was a bit glitchy , and I will definitely watch it again 'On Demand' when available. It was a great show with some surprising songs and super guitar work. (Sherry Keith - Daytona Beach, FL)

Hi! I just finished watching the February 'Love' broadcast… The energy comes through loud and clear! The warmth of love expressed in the music and through Dougie …as well as knowing the whole family is behind the scenes, is a gift. Love to you all! (Laura from Burlington, Vermont)