As he celebrates his 40th year as a touring musician, Dougie MacLean, one of Scotland’s most successful singer songwriters,  was one of the main performers at the Closing Ceremony of the XX Commonwealth Games at Hampden Park on Sunday August 3rd playing to an estimated global audience of over 1 billion in 71 countries! In fact he had the honour of musically ending the 'Games' with his song "Caledonia" (performed with his band) followed by "Auld Land Syne" where he was joined by Kylie Minogue, Lulu and Deacon Blue as well as massed pipes and drums! 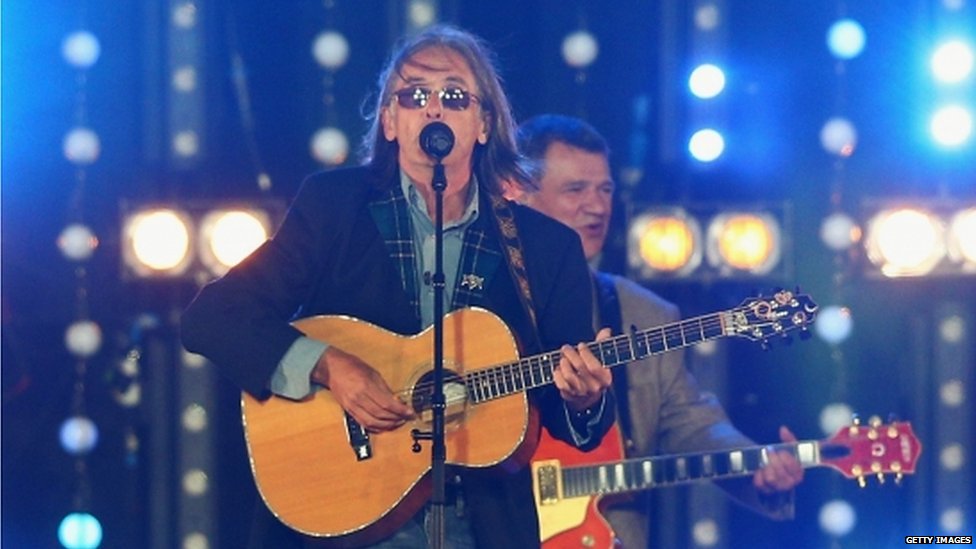 Dougie was delighted to be reaching such a wide international audience:
“This was the perfect peak in what is proving to be an exciting year of celebrations for me and though nervous I couldn't wait to take to the stage last Sunday – it’s a nerve racking thought to play to such a huge audience, but I'd been watching some of the Games and the crowds were fantastic, so I had a feeling it would be a great night.”

Scottish singer songwriter Dougie MacLean (OBE) tipped 2014 as the pinnacle in his varied and exciting music career and so far he hasn’t disappointed.  Dougie MacLean turns 60 this year, has just recently released “Till Tomorrow” a stunning album of his songs with the Royal Scottish National Orchestra and his popular music festival Perthshire Amber has reached its tenth anniversary!

Originally famed for writing Scotland’s anthem ‘Caledonia’, MacLean has built an international reputation as songwriter and composer.   He has performed in concert and at festivals all over the world including esteemed stages of Carnegie Hall in New York, London’s Festival Theatre and the Sydney Opera House.    He received two prestigious Tartan Clef Awards, a place in the Scottish Music Hall of Fame, a Lifetime Achievement from the BBC Folk Awards and an OBE.

The 40th anniversary tour has involved concerts and festivals from the Isle of Tiree in the Hebrides to Canterbury in England to Milwaukee in the USA!
In May, Perth Festival of the Arts hosted the world premiere of MacLean’s new songs and compositions, which he interwove into his very popular Perthshire Amber Suite.  The ‘Perthshire Cantata’ with strings and celtic musicians was performed as the closing concert of the festival and received rave reviews. This performance was quickly followed up by a concert at Glasgow Concert Hall with the Royal Scottish National Orchestra (RSNO) and the launch of their joint album ‘Till Tomorrow’.

October sees the return of MacLean’s popular music festival ‘Perthshire Amber’ which will mark it’s tenth anniversary with a packed line-up including the top Scottish  talents of Eddi Reader, Rachel Sermanni, Duncan Chisholm, Emily Smith, who will be joined by international artists Eliza Lynn from Nashville, Buddy MacDonald from Cape Breton, Nova Scotia and The Paperboys from Vancouver, Canada and by Martin Carthy as well as The Old Dance School from England.

Amidst many wonderful concerts the highlight of the festival is likely to be the concert with the RSNO at Perth Concert Hall on Friday 31st October, a repeat of the highly praised Glasgow concert... this time on MacLean’s home turf!  Tickets for this year's Perthshire Amber Festival are selling fast...with a number of concerts already sold out. The festival runs 24 October until 2 November, full information, line-up and box office information can be found on www.perthshireamber.com